No, this isn’t a drill! (or another Beyond comic) It’s finally time to announce the seventh SapphireFoxx comic! Introducing Favors And Followers! This will be the first SapphireFoxx comic with absolutely no magic in it. That means everything will be crossdressing, Sili-Gel, makeup, exercise, and other traditional TG elements.

“Luke is your fairly typical college student. He might be a dreamer with sky-high aspirations, but Luke’s been working hard on the traditional career path his parents laid out for him. That is until one faithful day at the start of Junior year where a single decision will set him on a journey he never could have imagined.” 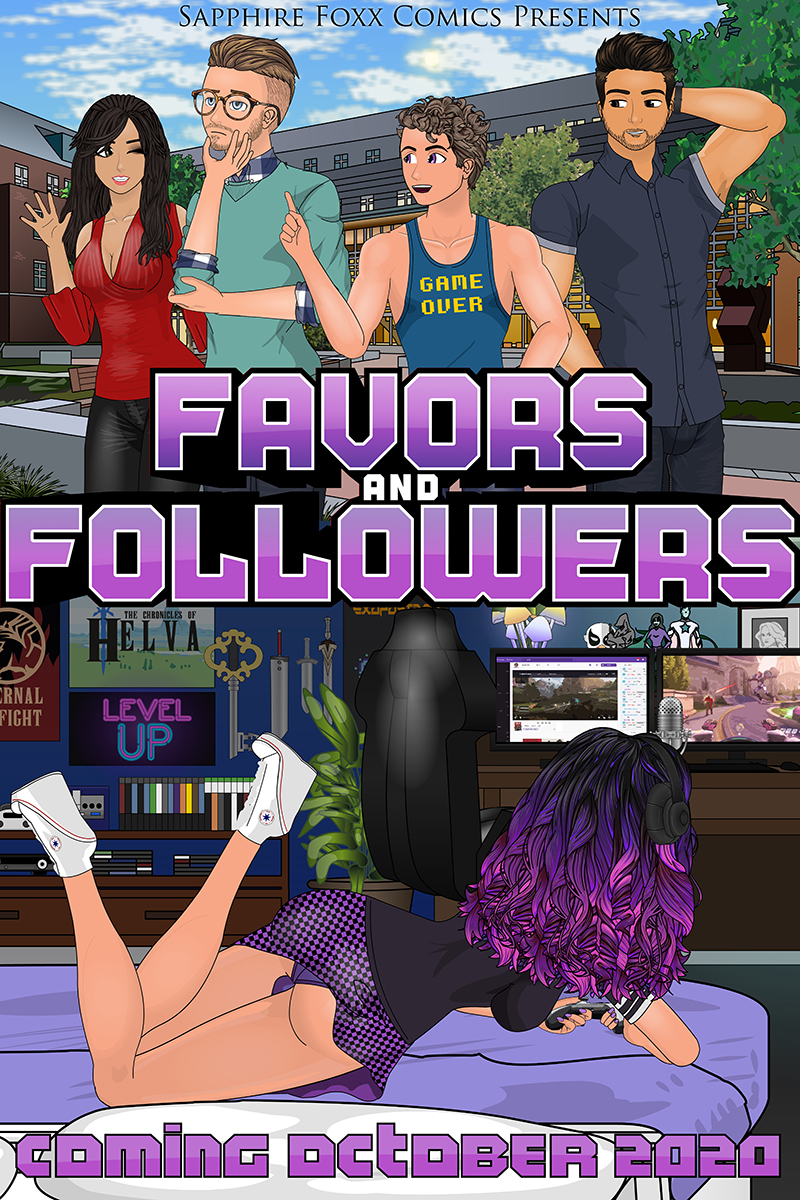 I do apologize over the lack of a specific release date at this point. I’m still finalizing the script for the last couple of scenes in Cinder Isle. However, I can confirm that Favors and Followers will start in October.

Also, this will be the first SapphireFoxx comic that isn’t written by me. One of the new writers, Christina Polk, is writing this one. Previously, Christina has written Wild Wednesday, a couple of Beyond comics, and a few other upcoming one-shots. I will still be overseeing the comic and mapping out the story like always. Anyway, I hope you all enjoy what we’ve been working on.

It doesn’t seem the same without Alistair at least making a cameo
but it still sounds interesting.

What is the name of his female persona ?

It looks promising and I’m glad there is no magic involved for a change.

will the streak of alistair aprearing in all comics break?

Can you put fake magic into this comic

Even though this is supposed to be a non-magic story is it in the greater SF universe and will there be an updated SF timeline released?

Why is Juan and Jasmine in this?

Zillatrek
Reply to  D The Weeb To Magic Girl Dee

They’re not. That is not Juan. Juan has a slightly different skin tone than the guy on the right. Juan’s skin is more of a light brown, that guy’s skin is bronze.

D The Weeb To Magic Girl Dee
Reply to  Zillatrek

Its just that they look way too similar then.

I regard Siligel as magic as well as everything else overtly magical. We don’t have anything remotely like it yet.
One thing was not mentioned in the non-magical description, surgery. If this male to female transform DOESN’T include genital reassignment surgery at the end, it’s just cross dressing, something I find very off putting. Currently, being a true transsexual in my book includes giving up your previous gender completely. That also means becoming an infertile member of your new gender until ovaries, the uterus, balls and penis become transplantable. They have transplanted uteri with limited success.

D The Weeb To Magic Girl Dee
Reply to  MtnMan

There’s no need to be a transmedicalist.

Magic, by definition, can’t be explained by logic or technology. The fact that sili-gel is advanced medical technology makes it not magic. In fact, the very nature of sili-gel makes it the opposite of magic.

Well, arent you a dick? Good thing no one asked you. As for crossdressing, what do you got against us crossdressers? Were just guys who want to feel beautiful.

So let me get this straight. You’re not truly transsexual until you’re post op? Man have i got news for you! Also, some may choose for one reason or another to keep the frank and beans or the vajayjay. Its not up to you to decide who is what

D The Weeb To Magic Girl Dee
Reply to  Undertaker

Transmedicalists sure are something else….

Undertaker
Reply to  D The Weeb To Magic Girl Dee

D The Weeb To Magic Girl Dee
Reply to  LaudoMatriae

Forgive my ignorance, but could you explain why that is a bad thing?

D The Weeb To Magic Girl Dee
Reply to  LaudoMatriae

It gatekeeps who’s gender is valid/transgender, and who isn’t, which isn’t conductive for anyone, except for transphobes.

Thank for explaining, to be clear, I don’t personally agree with those principles I just didn’t understand.

Siligel is science not magic. It is made through chemistry not alchemy.

Only crossdressing than I thing it will be last SapphireFoxx comic!!

Considering the success and popularity of several crossdressing stories on this website, especially Getting Into Character, it’s an impossibility that Favors and Followers will be the last comic. Sam’s crossdressing stories are just as fun and entertaining as his magic ones, so it’ll be great to see a non-magic main comic series for once.

Hahah please some of the non-magical content is going better and is more popular than the magical ones..

It’s basically crossdressing as much as Getting Into Character, which people have been loving.

Relying on only one theme is fine as long as your a good writer.

So far we’ve had six purely magical comics. I’m glad we’re getting one that doesn’t include magic for once. Maybe you should consider that some people prefer that.

All of the comics so far have relied on one “theme” and that is magical transformations, and people haven’t been upset or disappointed by those comics. It’s just that this will be the first comic to make it about crossdressing, which is far from unheard of on this website. There are plenty of people on this website that enjoy the non-magical transformations even more than the magical ones.

I haven’t watched many of those videos. I’m here for the magic, which has been your bread and butter since day one. There are plenty of crossdressers in the real world. The draw to your site is imagination. Personally I think you’re catering to a smaller subset of your audience with this theme and it’ll be off putting to some as well. Your site though. I hope it does well, but it’s not for me.

D The Weeb To Magic Girl Dee
Reply to  chasicle

I agree, but what is done, is done. Just let it be.

I would argue that Sam’s bread and butter has not been magic, just simply transformations, in any form that they may come in. Even if you’re not interested in non-magic series like Getting Into Character or Doing Business As, those series have proven to be very popular among a large portion of Sam’s audience.

If there are subscribers who don’t like that there’s an on-going comic series that doesn’t have magic, they’ve got six other long comics involving magic that they can read instead. Considering the overwhelming popularity of non-magic animated series, it’s about time for a non-magic comic.

Certainly a large vocal audience. I’d be interested to see the stats on viewership for the cross dressing videos vs other series.

Look at this way – Getting Into Character is the most popular series on the site at the moment. The second most popular is not even that close. Not just in terms of the vocal audience, but the number of views on GIC’s animations too. Sam did a poll a while back asking about everyone’s favorite series and GIC came in first place by a wide margin. The fact that Sam is now making a new non-magic comic so close to the end of GIC cannot be a coincidence. The success of GIC must be the reason why Sam is… Read more »

I’m just here for transformations. And I actually prefer the ones that have sense of reality. Some that you can engage with and those that could actually happen to you. Magic isn’t real. Non magical transformations are. That’s why Sam’s no-mag content has been so popular the last few years. I even think you’re in the minority for not liking them 😉

Ooooohh finally a new comic! And it looks like this one will be one for the books! Thank you for the excellent news. I will be sure to resubscribe this October:)

One of the guys up there looks like a cross between Lorenzo and Alejandro.

im curious mr. Foxx could you give us a bit spoiler about this new interesting comic? 🙂

One of the people on this poster looks like a younger version of Alejandro (from Undercover Agent). it’s unknown if this is a coincidence or not.