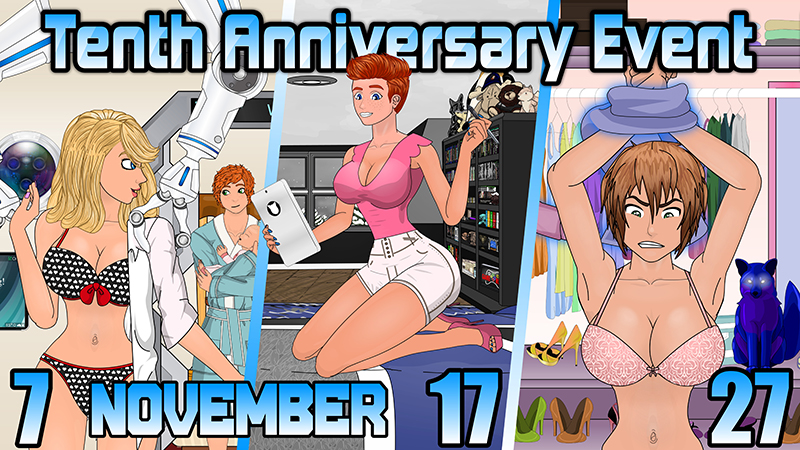 If you can believe it, the tenth anniversary of SapphireFoxx is right around the corner! Way back in November 2012 was when I first took up the alias of the blue statue and began posting TG flash animations online. Ten years later, it’s grown into a thriving business with a staff of twelve, and I’ve been able to support my whole family with it. So for that, I am eternally grateful to our fans for keeping SapphireFoxx going for so long, because we couldn’t do this without you.

Along the way we’ve created a huge interconnected universe of characters and stories, so what better way to celebrate ten years than to have a month full of crossovers? November will have three crossover one-shot animations, combining several fan favorite stories! We’ve also got the mother of all crossovers coming in the form of a Beyond comic! 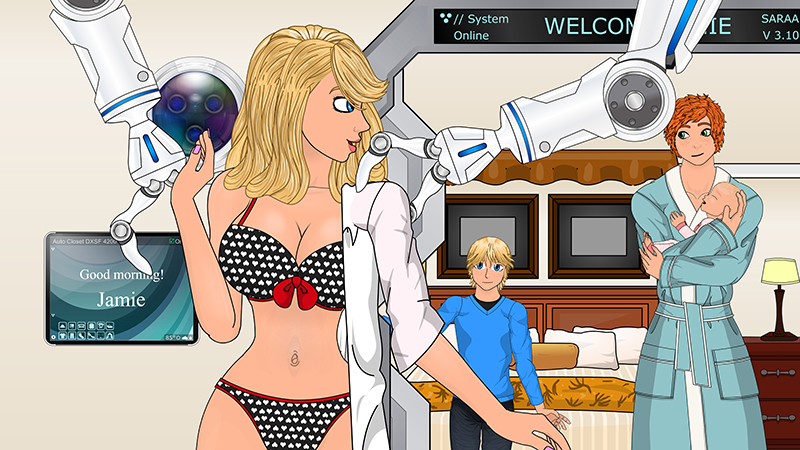 “Set after the series finale of Shifting Roommates, this one-shot shows what would happen if the married couple Jamie and Scott purchased an auto-closet. While mother-of-two Jamie has no issues with the new machine, Scott has a harder time dealing with this AI named S.A.R.R.A. Especially when it mistakes Scott for his wife!” 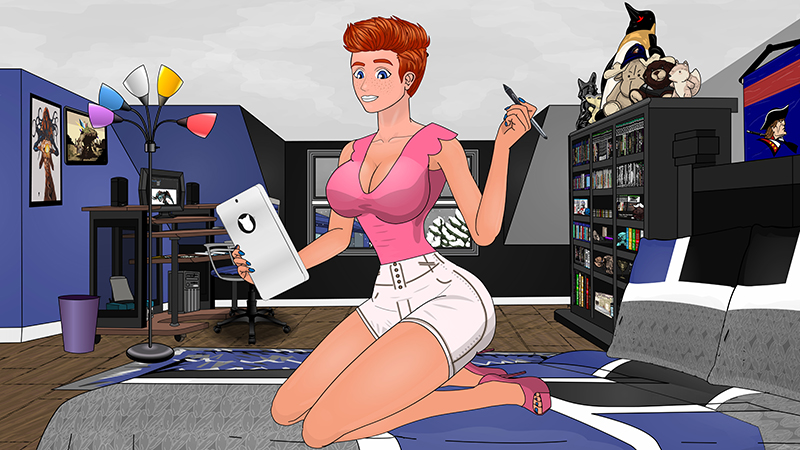 “For the first time ever, the ‘Sapphire Foxx’ himself, Sam, will be featured in an animation! Set ten years ago when this young animator was starting to make a name for himself online. This one-shot shows what would have happened if Sam’s new tablet came with a special feature: transforming him into whatever character he draws!” 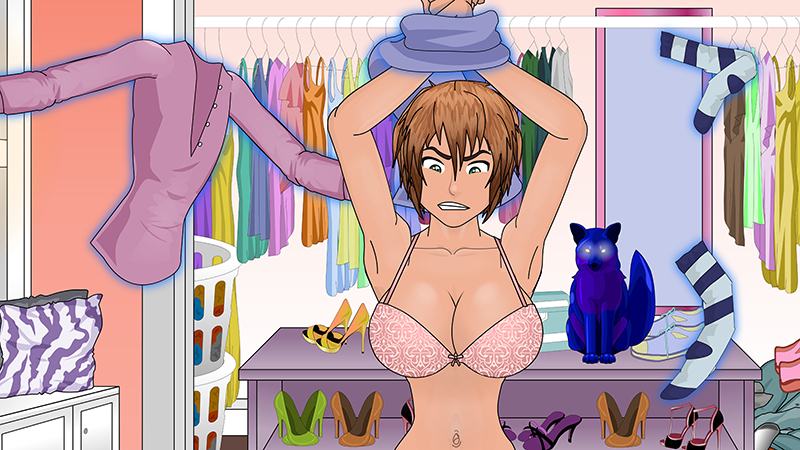 Getting Into Character: Stealing From Sis — Coming November 27 – Includes Beyond Content

“What would happen if on the day of his big rehearsal, Austin went to ‘borrow’ something from his sister Madelyn’s bedroom, only to find a curious looking blue statue waiting for him in the closet? Two of our most popular animated series get crossovered in this re-imagined start to the Getting Into Character series.”

It wouldn’t be an anniversary if we didn’t include comics, so we’re putting together the biggest crossover since The Avengers! This fall The Layover combines eight fan-favorite characters into one story! However, for the first time ever the fans on the regular site will get to enjoy part of this new Beyond comic! The first thirty pages of The Layover will be made available on the original site, censored of course. However, the Beyond crowd will get the comic almost a month sooner. 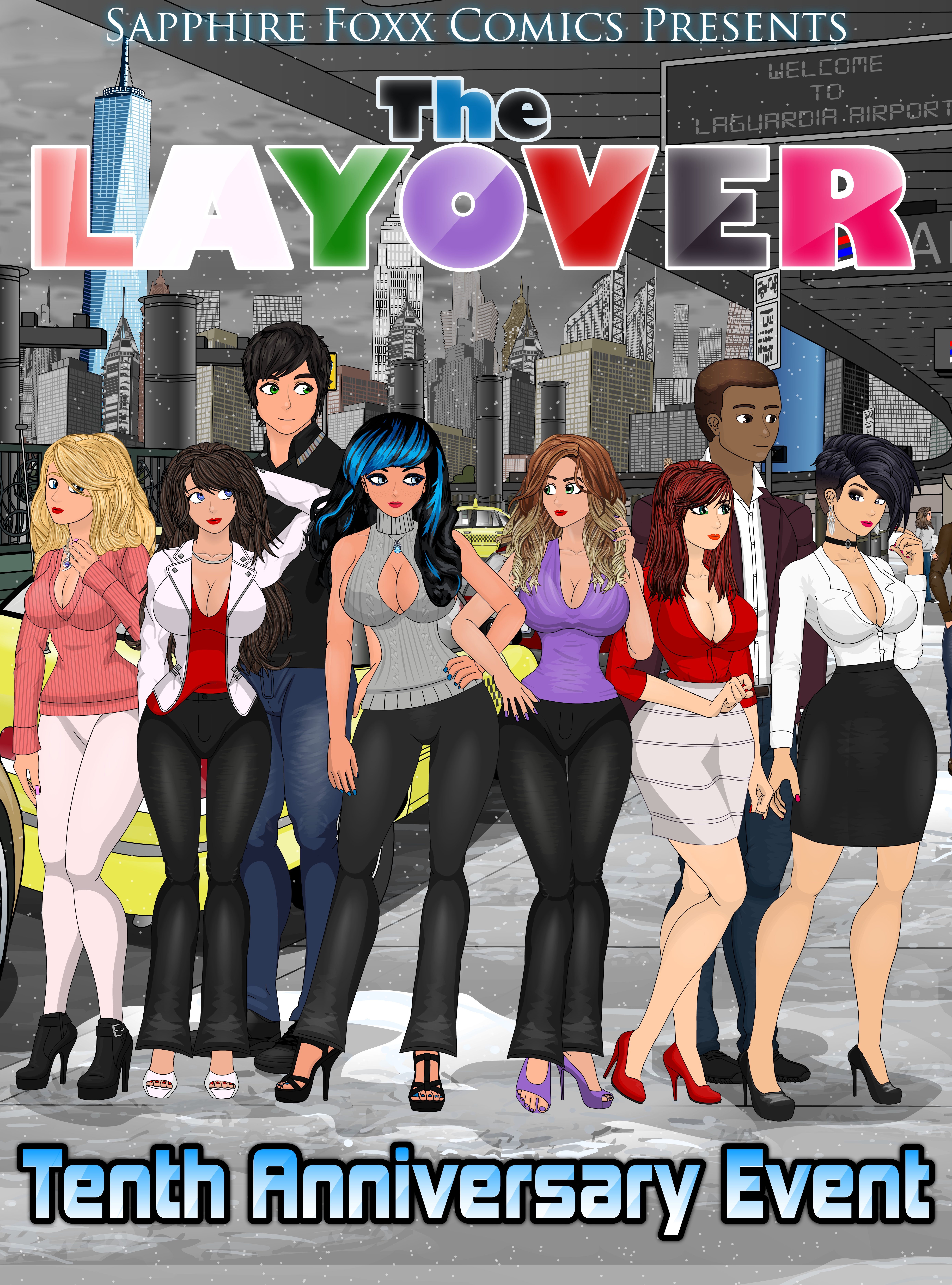 “What would happen if eight of SapphireFoxx’s most popular characters were to all meet? During the busy travel week of Thanksgiving, a huge blizzard grounds flights across the northeast. Now Alyssa, Isaac, Isabelle, Chris, Mariah, Jamie, Robin, and Kelly all find themselves stranded in a New York airport.”

I hope this tenth Anniversary event lives up to any expectations you might have had, and that we’re be celebrating more anniversaries for years to come!

Yes, the main site will continue with Crossfire, so you’ll be getting two pages a day for November.

Yep, only 30 pages of the whole comic will be here on the regular site.

I don’t want to be that guy but couldn’t Chris and Isabelle just teleport back home Isabelle has literally teleported from Seattle to Australia so I’m she can teleport her and Chris back home.

That is addressed early on.