As Favors And Followers nears its end, the time has come to reveal the next comic: Crossfire! As you can imagine we’ve had more artwork to do than normal to prepare for such an entirely new setting, so this reveal is coming a few weeks later than we would have liked. At long last, things are coming together for the eighth SapphireFoxx comic.

Not only will Crossfire be the first comic set outside of the SapphireFoxx universe, it will be our first story taking place in the sci-fi setting of galactic space! Crossfire will be premiering December third, after the conclusion of the 400th page of Favors and Followers! 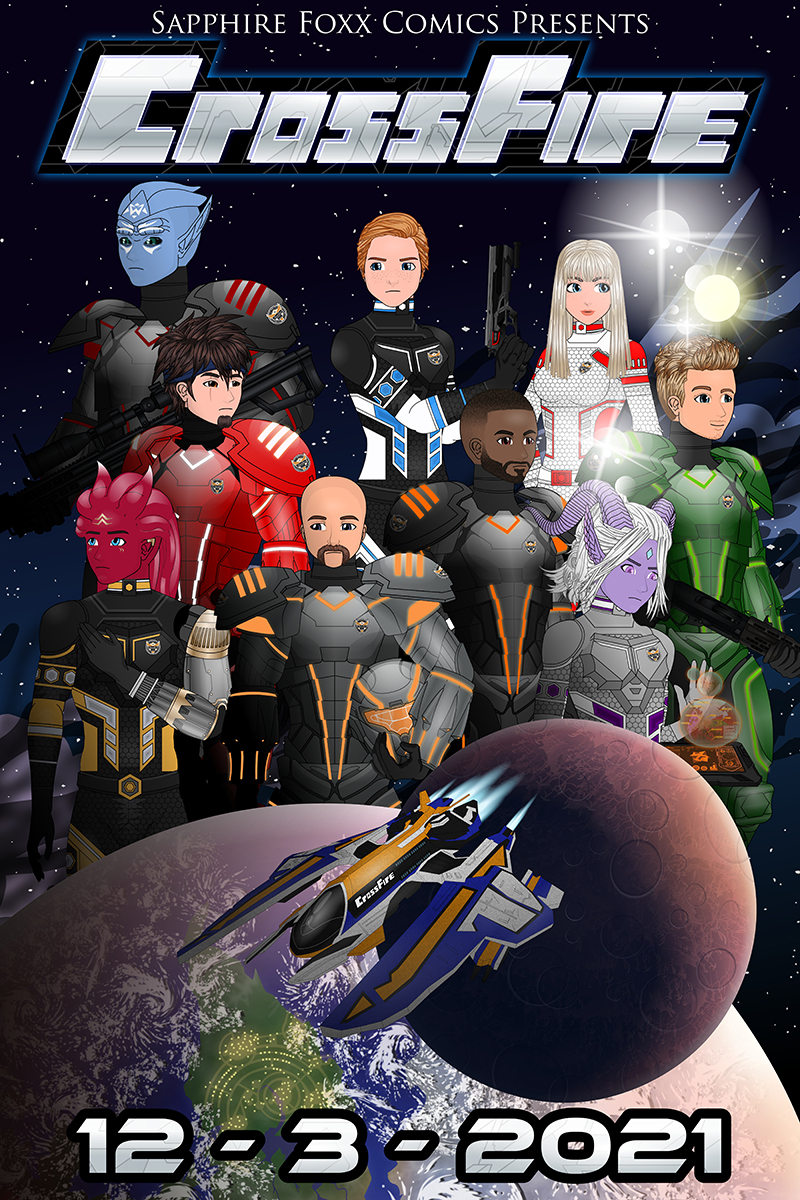 “The mercenary crew of the starship Crossfire are no strangers to the mysteries and dangers that exist across the galaxy. From assassinations, to escorts, to diving into the depths of The Great War, there’s almost nothing the crew hasn’t experienced in action. However, a distress call from a small colony world on the fringe of known space will turn out to be a mission no one expected. With sixty-four thousand colonists missing without a trace from the world known as Odyssey, the Crossfire will be pushed to the limit to discover the truth, before they go missing in action themselves.”

In addition to the comic, we’ll have a prequel one-shot animation called Crossfire: Odyssey! Its set three months before the beginning of the comic, and will shed light on what happened to the colonists of Odyssey. 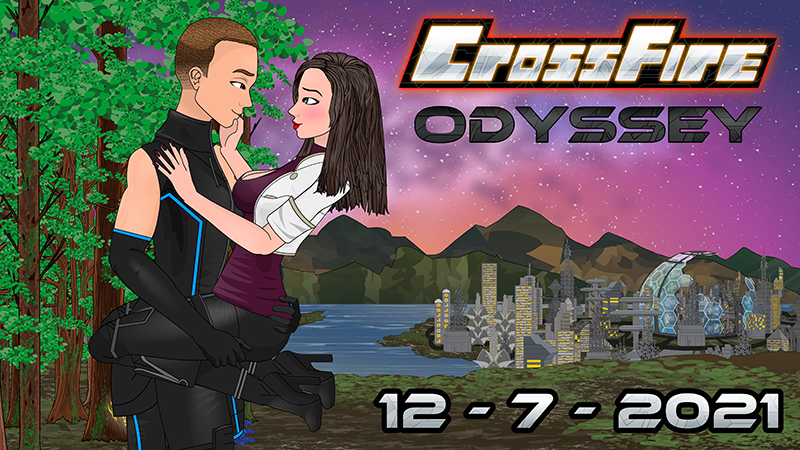 “The human colony of Odyssey was no different from thousands of other planets across the Sol Federation’s vast territory. Prosperous and far from the Front Lines of The Great War, it’s populous enjoyed a placid life on the edge of the galaxy. In late 4011, two young colonists named Marco and Vanessa left the city to go on a romantic hike in the newly terraformed forests of the Athena region. Little did the couple know that they would stumble upon in the alien wilderness.”

Lastly, we’ll be posting some world-building lore and character bios leading up to the premiere of the comic. To summarize everything that’s coming in the next few weeks:

I hope you’re as excited for the new series as we are! Although you might be wondering how such a story would have gender transformations in it, I assure you they will be there and there will be plenty of transformations. I won’t spoil the details yet, but you can expect it in the prequel animation. With such a new story environment, it’ll be an unique and new way to have more gender transformations.

I see lots of Mass Effect inspiration in those designs, especially the armor and ship, I approve! 😀

I just wish they had have done some research about how to design a starship. See my below comment for details.

so james what kind of new transgender tech do you think sam may come up with for this new comic . like maybe taking a current device like the sili – gel cream and or shots and putting them in to pill or capsule form now i know that it’s not a original idea but it might just happen that way .

We shall see, Pie.

getting some Paradox Alice vibes from this and i love it, this is gonna be fun

Really? Well, the shape of the ship, the male Alarii and all of that gives me hints of Mass Effect too should be interesting to see what other SF gets referenced by our SF

I was thinking Mass Effect too.

Hopefully one of the Crossfire crew is an alien with genderbending/shapeshifting power.

That would only make sense for that character changing gender not any of the others.

There have been several aliens throughout fiction that have the ability to transform other creatures besides themselves. For example, the alien in John Carpenter’s The Thing or the aliens in District 9. Maybe this comic will follow similar lines and have an alien that can not only change its gender, but also the other crew members’ genders.

D The Weeb To Magic Girl Dee
Reply to  Cubsfan31

Or maybe a body swap story? Or the MC made a deal to change their body, but it effected everyone else?

Interesting idea but that sounds more like a magic thing than sci-fi.

I really hope it’s something original not a generic gender changing machine.

That isn’t original, just something that already exists in a different form.

maybe Radiation?, that hasn’t been done in a Sapphirefoxx comic before

I’m sorry what? How would radiation do that? I would rather it be something unoriginal than completely nonsensical.

You ever watch Star Trek? Space radiation is responsible for a lot of the strange sci-fi stuff that happens in those shows and movies. As well as spatial anomalies, weird planetary properties and the biological products of unknown aliens.

Yeah and it is dumb in Star Trek too. And that makes it unoriginal AND nonsensical.

I can’t think of any other story that has gender altering radiation, so I’d argue that is the opposite of “unoriginal.” And spatial radiation exists. And given how little we now about the universe, it is not outside the realm of possibility that space radiation does things we can’t explain otherwise. So while space radiation is strange, it is not “nonsensical.” There is logic to it within the realm of fiction.

Ok you have a point about it not being unoriginal.
Do you even how radiation actually works? It’s literally just fast moving particles and/or waves depending on the type. It can’t do something as complex as altering a person’s gender directly on its own, now it you could have a machine targeting radiation to different parts of someone’s body to change them. But that would really be radiation doing it, just a machine utilizing it.

It doesn’t matter how radiation is supposed to work. It’s fiction. If fictional radiation can create Godzilla and the Hulk, then it is not outside the realm of possibility for it to change someone’s gender.

Ok fair enough. You have your opinion, I have mine. I just personally think “because radiation” is lazy writing.

D The Weeb To Magic Girl Dee
Reply to  Zillatrek

Spatial anomalies would be the best path imo.

Looking forward to it! However… Your ship design doesn’t make any sense. Sorry this is kind of a rant. There is what looks like windows on the side and based on their size I would estimate this thing has 3-5 decks. You don’t put wings on a ship this big, if it for some reason needs to fly in atmosphere, (which because of the size should be avoided) then it should use some sort of hover mechanism. At first glance I thought the black bulge on the front was cockpit but that with the windows it clearly isn’t. Is this… Read more » 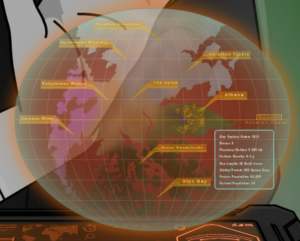 With just this poster reveal, this comic is already shaping up to be one of the grandest and most bizarre SapphireFoxx stories to have ever been made. I’m so ready for this new adventure!