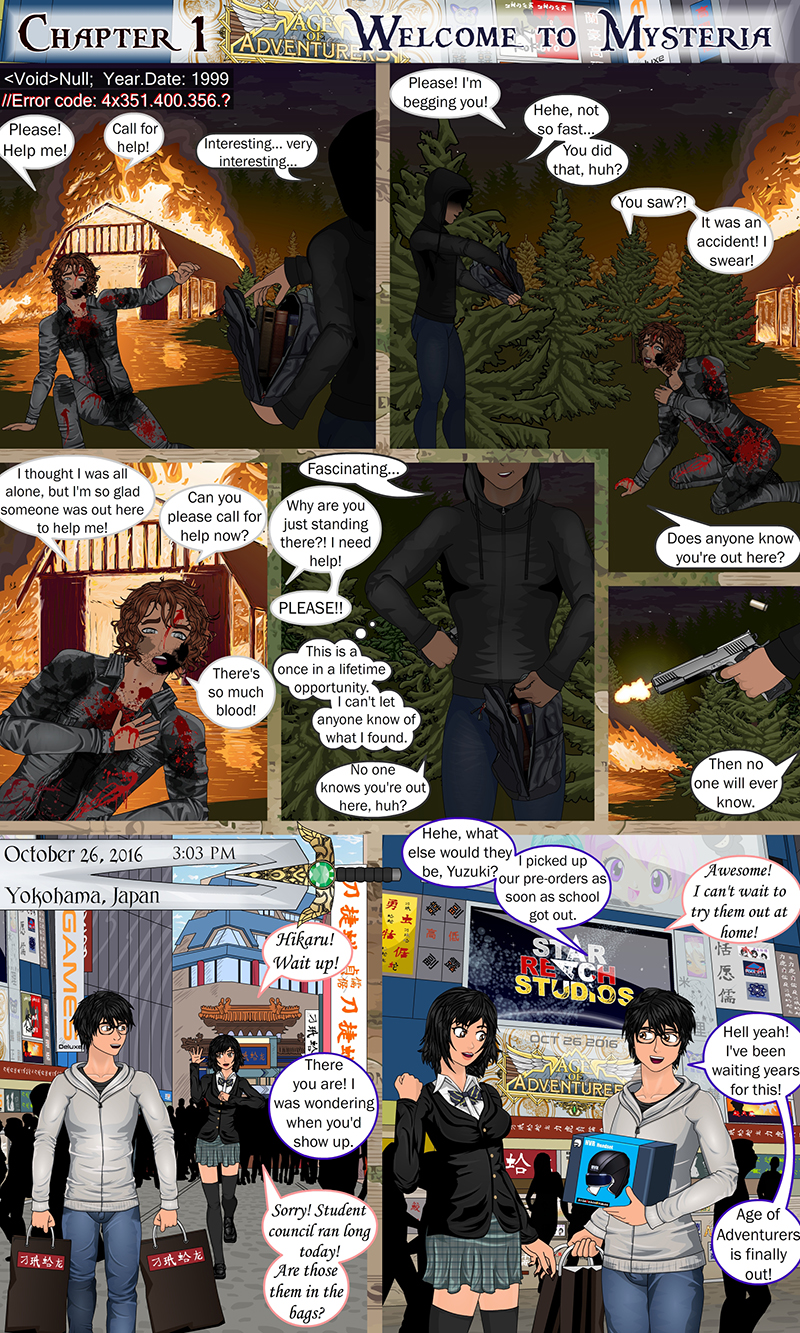 “The world’s first Neural Virtual Reality video game hits the market! In Age of Adventurers players can become their character and explore the vast world of Mysteria. Hikaru and his little sister, Yuzuki, are two players who can’t wait to try it out on launch day.”

Well, it looks like somebody won’t be partying like it’s 1999. Fun fact, Maker’s Game already has a higher death toll than the previous three comics combined.

By the way, the new characters’ names are pronounced:
Hikaru: HE-KAH-ROO
Yuzuki: YOU-ZOO-KEY

One more thing, here’s the first ever SapphireFoxx Timeline. Hopefully this clears up a lot of complicated and interconnected stories. Maker’s Game takes places about a year after Fractured and Matchmaker. However, there’s one major series that’s noticeably, and purposely, absent from this timeline.

brother hikaru and sister yuzuki had just picked up the latest vr game boy those units sure cost a ton of dough. i hope that their experiences is a great one.

Left off awakening, guess your not tipping your and as Ruby’s girls increase their body count and she skewers innocent sapphire Nessies.

So this is the guy becoming the final boss. Ha, you think we could forget heheehehhe

That’s a huge spoiler for anyone catching up to the comic!!

O.o….did..I miss something? I don’t recall seeing…WGATEVER that was at the start in the preview before I ever subscribed.

I wonder..where is awakening on the timeline?

And I quote: “However, there’s one major series that’s noticeably, and purposely, absent from this timeline.”

Halloween Switch will now take place after Maker’s Game on the timeline.

then you need to change some of the Videos from Halloween switch
because there are year marks in the Videos
eg: https://www.sapphirefoxx.com/halloween-switch-11/ Time 5:40

what the heck is “Ashes..” on the far right?

If you check the “Animation Status” page, you’ll see that Sam is working on a new upcoming series called “Ashes To Ashes.”