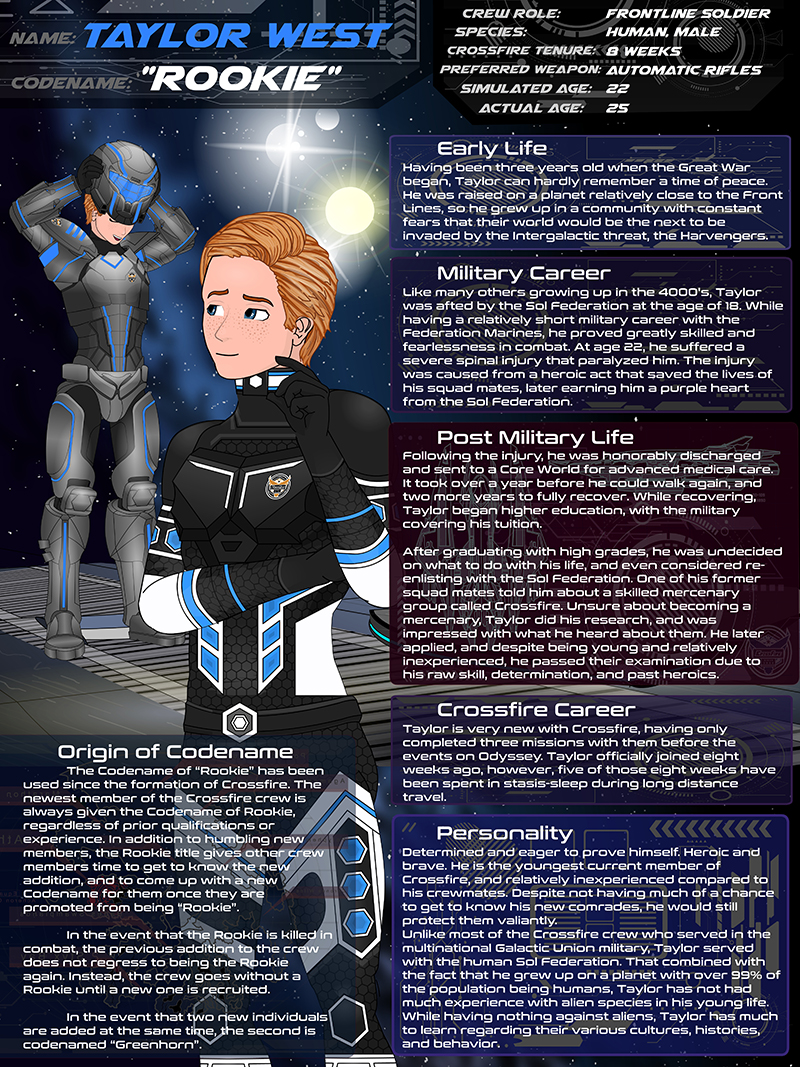 Here, here, here we go!
So they’re finally here, fighting for you,
If you have some ammo, you can join in too,
Turn your thrusters up, if you want to fly,
As we take you through, the star-filled sky!
Huh!
C.F. Crossfire!!

Kudos to you if you get the reference.

C’mon Rookie, take it to the fridge!

boy that rookie is a hot shot fighter with a keg of explosives waiting to go off on some bad guy that does him wrong .

That last part about the codename is weirdly specific.

I don’t think it’s “weirdly specific” at all. It’s answering questions that arise when you say that “the newest member of Crossfire is always given the codename of Rookie.” In that respect, a lot of questions come to mind, like how the Rookie gets a different codename, what happens if they die in action, and what happens if they get newer member before they’ve earned their real codename.

Let me guess, this is the one that will get TG’d?

Well, given the teaser from August…yes, actually.

Cubsfan31
Reply to  D The Weeb To Magic Girl Dee

Given that this comic is going to have a cast of nine main characters, since there are supposedly nine members of the Crossfire crew if Sam’s schedule from yesterday is to be believed, then what makes you think that Rookie is only one who will be TG’d? With comics that have had casts of multiple main characters, like Fractured, Maker’s Game and Cinder Isle, it always ended up with every main character transforming.

It wouldn’t surprise me if all nine main characters got transformed at some point in this comic. It’s just very likely that Rookie will be the first.

D The Weeb To Magic Girl Dee
Reply to  Cubsfan31

I figured that to be the case. I’m hoping though that one or two of the characters stay the same, maybe with minor personality alterations, and that only.

They’re doing their part, are you? Join the mobile infantry!

As for yesterday’s page of Crossfire Timeline:

“In a distant future, mankind has reached the stars. But the galaxy is troubled.”