With the Beyond comics running for about a month or so, it’s time to introduce the new Beyond series. Different Perspectives: The Substitute Dance!

“Set after Jessica and Holly learn Chris’s secret, but before he met Isabelle, Chris gets himself into yet another sticky situation. Jessica is furious with Chris after he accidentally fractured her leg, and it happens the morning of the Winter Dance! Jessica scored a date with one of the school’s most popular boys, so she isn’t going to let this chance go to waste. Chris will have to go to the dance in her place.” 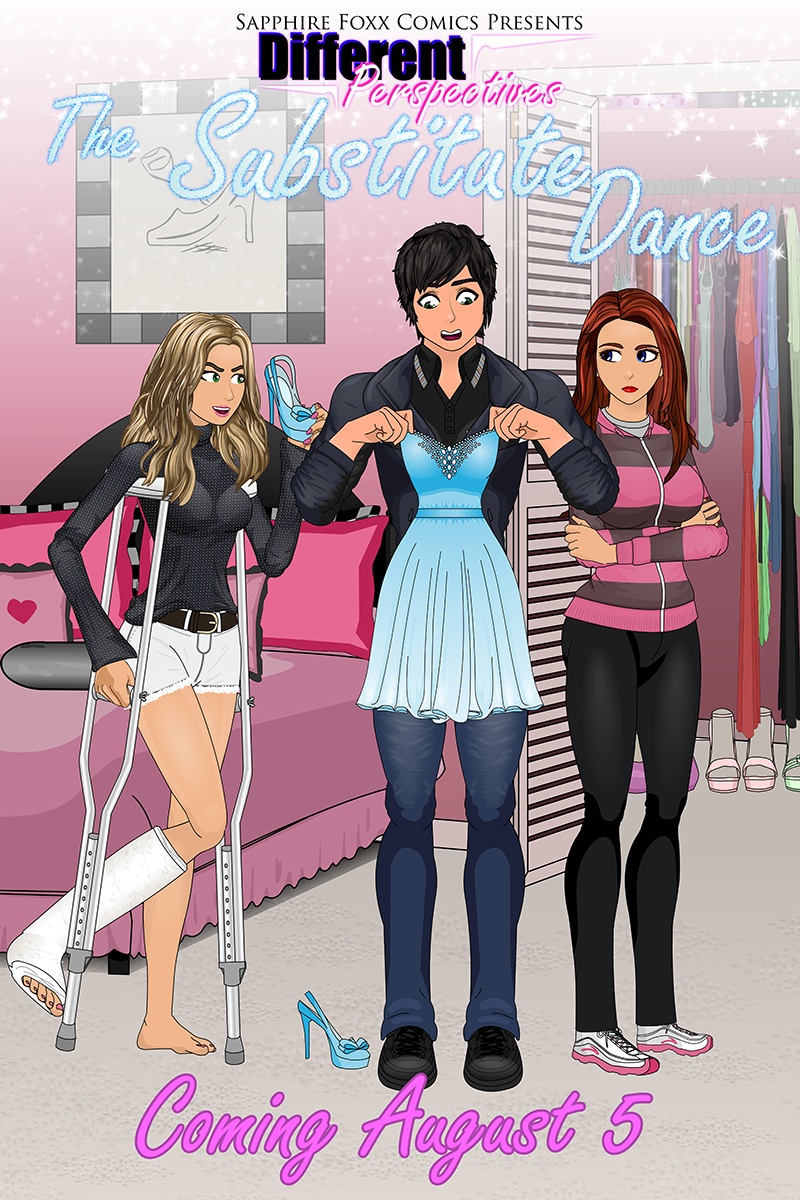 I always felt that the time period after Jessica found out Chris’s secret was too underdeveloped without much fun happening between those two, so this comic will be an interesting addition. Specifically, this comic will take place after page 289 of the original Different Perspectives.

As for a hint about the third Beyond comic, here’s a hint: It involves a completed animation series.

Sam has established that “Substitute Dance” takes place in a different timeline than “Different Perspectives.” It is non-canon, as are all exclusive Beyond comics.

Where is the new part of this comic? It doesn’t appear

“The Substitute Dance” will not actually appear on this website. It will be exclusive to SF Beyond and it will start tomorrow. Sam miscalculated when he made that poster and the Beyond comic will start August 6.

If you subscribe to beyond do you get all the content that is also on this site? Or is it just the NSFW stuff?

Everything that’s on this website is also on SF Beyond.

From the descriptions Sam gave to potential upcoming Beyond comics, the next one will either be “Becoming A Bridesmaid: The Best Man” or “Too Good to Interrupt.”

I never said it was one of those two.

Oh my god. I can’t believe I missed that. In that case I’m for more Isabell and Chris with Swap Poker or a follow up story for Halloween switch

Any way you could add another alternate form of payment for Beyond? Because it seems it doesn’t accept my bank.

Sam is working on adding E-checks as a payment option for SF Beyond. Other than that, the only payment options are credit/debit card or sending cash or a check directly to Sam’s P.O. Box.

If you’re having problems registering your credit or debit card, please email support@sapphirefoxxbeyond.com and they can work you through the process. Additionally, you can consult with your bank to see what the problem might be. Sometimes the problem can be that your home address is different from your billing address.

Read that there are several others that have problems signing up with Mastercard so that is probably the issue. So I think I’ll have to wait until the E-checks are added, since sending cash to Sam’s P.O. Box every month might be a bit excessive from the other side of the world xD

Tried both my former billing address at my parents and the one where I currently live but that didn’t change anything.
Tried talking with my bank and they said that it must be the card company as they can’t see any problem from their side.

You do not have to send cash or a check to Sam’s P.O. Box every month. You could send $60 in one envelope and you would have paid for four months of a SF Beyond subscription.

In any case, contacting support@sapphirefoxxbeyond.com is still the best solution.

I am a returning fan and with the new forms of payments looks like I can’t join back up at this time because I was using a Vanilla Visa prepaid visa going to Orbit pay unless I want to mail money. will be interested to see E-check.
But I was reading the comments about MasterCard problems has anyone asked if MasterCard has an adult firewall on them? I know Sam has set up a dummy name so people who read account information does not see it but that does not exclude MasterCard I.T. department.

I don’t believe prepaid Visa gift cards work as a payment option on SF Beyond. Only an authentic credit or debit card works (as well as sending cash or a check to Sam’s P.O. Box).

And according to Sam, Mastercards work just as well as any other card. If there happens to be a declined Mastercard payment, then it can be corrected by reaching out to SF Beyond’s support staff.

Thank you for the information

SapphireFoxx
The Fox
Reply to  Freja

You can contact support@sapphirefoxxbeyond.com and we’ll be happy to sort out what the error is with your payment. Mastercards do work, so your declined payment can be corrected.